The Room Where It Happened Summary by John Bolton 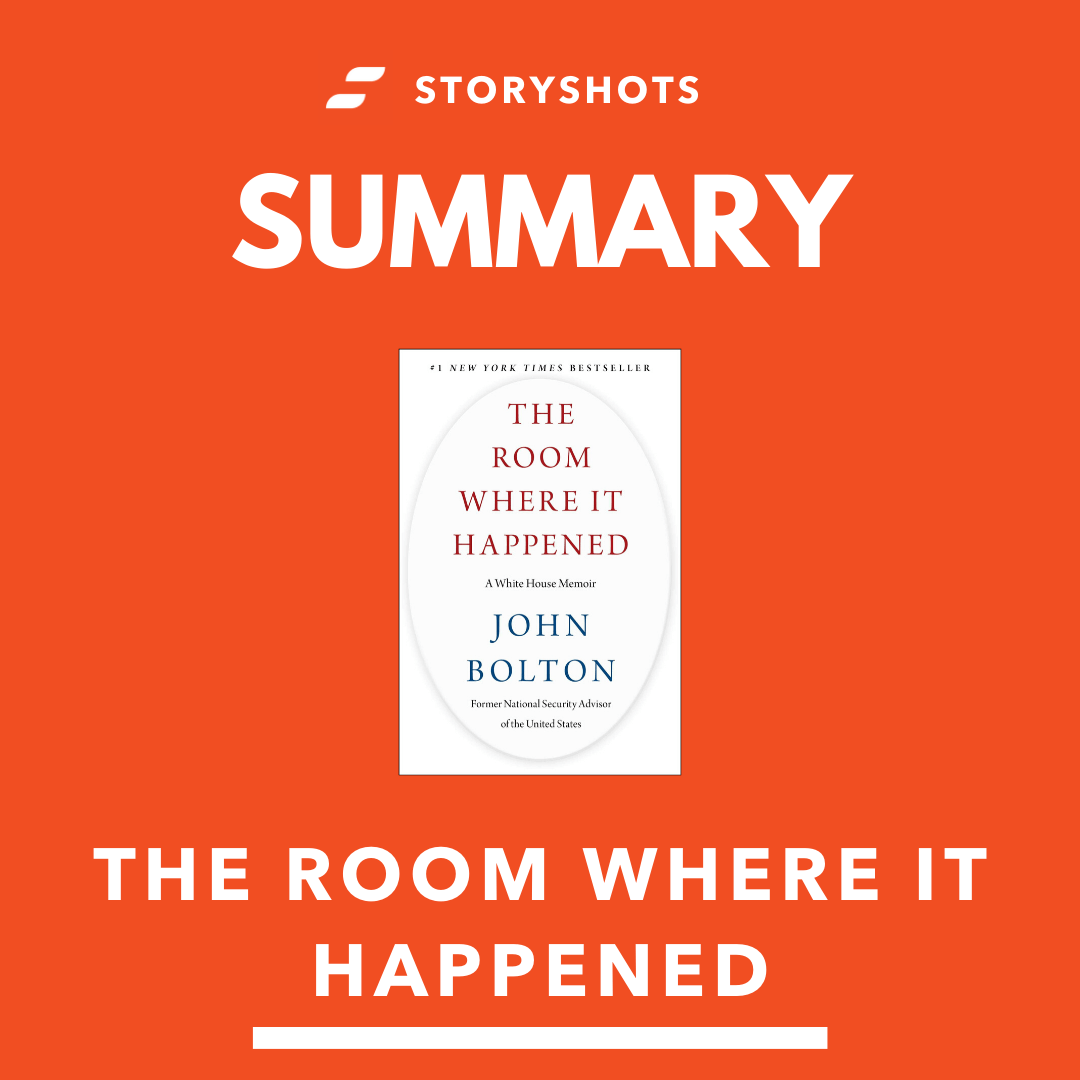 Contents hide
1 Synopsis
2 About John Bolton
3 What Was Bolton’s Reasoning For Publishing This Book?
4 China
4.1 Economic Deals
4.2 Supporting Human Rights Violations
5 Turkey
6 The United States of America
7 Why the Democrats Supposedly Didn’t Go Far Enough With Their Impeachment Efforts
8 Trump Wanted to Serve For More Than Two Terms
9 Supposed Misunderstanding of Other Countries
9.1 The UK
9.2 Finland and Russia
10 The US Could Have Easily Quit NATO
11 Venezuela Policy Was Always a Headache
12 Mocking Others Was Commonplace In the White House
13 Related Book Summaries

The Room Where it Happened: A White House Memoir is a book recently released (June 23rd) that has been hugely divisive in America since. It currently sits 3rd on the Amazon book charts. However, Donald Trump has said that any money the author makes from book sales will be invested back into the US. The reason behind this statement is that John Bolton’s book provides several criticisms of Donald Trump. These criticisms were developed by John Bolton while working as the National Security Advisor to Trump from April 2018 to September 2019.

This book also had an impact on the Senate impeachment trial of January 2020. Several pieces of the manuscript were leaked before the trial.

On June 16th, 2020, the Trump administration attempted to block the release of this book. Bolton was accused of breaching nondisclosure agreements he had signed while working in the White House. However, this request was denied. So, we have a book summary of this book for you.

John Bolton is a highly experienced professional in politics. He is an American attorney, diplomat, Republican consultant, and political commentator. Plus, he was the US Assistant Attorney General under President Ronald Reagan. John was also the US Ambassador to the UN from 2005 to 2006. most importantly, he was the US National Security Advisor under President Donald Trump between 2018 and 2019.

As a Foreign Policy Hawk, Bolton is an advocate of regime changes in certain countries: Iran, Syria, Libya, Venezuela, Cuba, Yemen, and North Korea. This means he is in support of military regimes within Syria, Libya, and Iran. A Republican, Bolton’s views have been described as American Nationalist and Conservative. As a previous director of the Project for the New American Century, he favored going to war with Iraq.

What Was Bolton’s Reasoning For Publishing This Book?

“As the Duke of Wellington once said (perhaps apocryphally), my attitude was, ‘Print and be damned’”

The main reason Bolton published this book is that he believes Trump is incompetent and unfit for the presidency. Therefore, the vast majority of the book is about Bolton’s views on Trump and examples of Trump’s incompetency.

In this book, Bolton describes an encounter between President Trump and General Secretary of China, Xi Jinping. This encounter took place at the 2019 G20 meeting in Japan. Bolton describes how Trump dramatically turned the conversation to the upcoming 2020 US presidential election. Re-elections are an unheard-of topic during G20 summits. Bolton claims that Trump sought out help from China, pleading with Xi to help him get re-elected. Trump believed Xi could ensure that he would win.

Trump supposedly wanted to take advantage of China’s economic capabilities. Specifically, Trump wanted to establish deals with China that would help farmers in the US. Supporting US farmers would help Trump acquire important votes. This deal would involve the Chinese increasing the amount of soybean and wheat they purchase from the US.

Bolton also explains how Trump’s pleading with Xi was targeted, as agriculture is one of the major industries in the Midwest American states. These were the most important states that Trump won on course to win the 2016 Presidential Election.

Another way Bolton claims Trump behaved unacceptably is in his support of Xi’s decision to build internment camps. Within China, specifically the Xinjiang region, approximately one million people are detained in camps. These people are almost exclusively Uighurs and other ethnic minorities. Supposedly, Xi was pushed to defend these camps at the G20 summit. Trump suggested that he approved of China’s sanctions. Trump had said to Xi that he should go ahead with building the camps as it was the right thing to do.

“Erdogan was himself a radical Islamicist. He was busy transforming Turkey from Kemal Ataturk’s secular state into an Islamicist state.”

In addition to China, Bolton also suggests that Trump supported Turkish President Recep Tayyip Erdogan. In fact, he offered him help in 2018. Specifically, Bolton claims that Trump was willing to ‘take care of things’ when the US investigated a Turkish company over potential violations of Iranian sanctions. He described the prosecutors as “Obama people” and that he was willing to help.

The United States of America

Finally, Bolton described how Trump approached matters in the US. Specifically, he explained how Trump has a pattern of intervening in US law enforcement. Bolton points out that Trump intervenes to encourage results that fit his narrative or support decisions he wants to make.

Trump Wanted to Serve For More Than Two Terms

Bolton claims that Trump had another conversation where Xi suggested that he wanted to work with Trump for six more years. Of course, this would not be allowed due to the two-term limit on presidents. However, Trump supposedly replied to Xi by saying that people were thinking about repealing the two-term limit so he could stay in power. Xi then explained how the US has too many elections, and Trump, supposedly, nodded approvingly.

Supposed Misunderstanding of Other Countries

“Trump is Trump. I came to understand that he believed he could run the Executive Branch and establish national-security policies on instinct, relying on personal relationships with foreign leaders, and with made-for-television showmanship always top of mind”

Bolton also claims that Trump misunderstood the basic features of other countries. These misunderstandings emerged before meetings with these countries’ leaders.

According to Bolton, in a 2018 meeting with then UK Prime Minister, Theresa May, an official referred to Britain as a Nuclear power. This claim was correct. After the US and the Soviet Union, the UK was the third country to test an atomic device. In response to this, Trump supposedly replied, “Oh, are you a Nuclear Power?”

Bolton claims that this response was not said in a joking way but instead was a gap in Trump’s knowledge.

Another claim by Bolton relates to a meeting with Russian President Vladimir Putin. This meeting took place in the Finnish capital of Helsinki. Trump supposedly described Finland as “kind of a satellite of Russia”.

Bolton believes that these misunderstandings were unsurprising as the intelligence briefings he had were not very useful. Trump would talk for considerably longer than the experts on entirely unrelated subjects.

“Issues were discussed in weekly meetings, chaired by Trump, in the Roosevelt Room or the Oval, that more closely resembled college food fights than careful decision-making, with no lower-level interagency effort to sort the issues and the options.”

The US Could Have Easily Quit NATO

Trump was and is a strong critic of the NATO military bloc. Specifically, Trump dislikes the amount of investment other members put into the bloc. He believes other members need to boost their spending. The US remains a member of NATO.

According to Bolton, though, there was a time during the 2018 NATO summit that Trump had personally decided that the US would quit being a member. Bolton claims that Trump had explicitly said, “We will walk out, and not defend those who have not paid”.

The most persistent foreign policy headaches for the Trump administration has been Venezuela. The US has strong reservations about the current President of Venezuela, Nicolas Maduro.

However, Bolton claims that Trump took this disagreement with Venezuela to the next level. Trump supposedly described invading Venezuela as a “cool” idea. On top of this, Trump would often describe Venezuela as being part of the US, despite its independence.

Mocking Others Was Commonplace In the White House

“We spent endless hours negotiating with ourselves, whittling away at our own position before our adversaries even got to it, a fine art the State Department had perfected.”

“It was like making and executing policy inside a pinball machine, not the West Wing of the White House.”

A wide range of people mocked Trump. He was even mocked by staff in the most prestigious roles under him. For example, the Chief of Staff, John Kelly, supposedly warned Bolton that the White House is a bad place to work. Bolton would soon find this out for himself.

Additionally, Bolton rumors that Mike Pompeo, Secretary of State, had written a note that described Trump as being “full of s***”.

Too Much and Never Enough by Mary L. Trump

The Audacity of Hope by Barack Obama