Get the audiobook for FREE.

New to StoryShots? Get the audiobook and animated summaries of Total Recall and hundreds of other bestselling nonfiction apps in our free top-ranking app.

Arriving in America as an immigrant at the
age of 21, he went on to dominate bodybuilding, before switching to movies and then again transitioning into politics.

Born in Austria in 1947, he grew up in a farming village.

His father was a police officer and extremely strict with Arnold and his elder brother.

He enforced discipline and training for his sons, who regularly completed chores from a young age and later played sports and exercised.

They even had to earn breakfast by doing sit-ups.

His first entrepreneurial project was selling ice cream at the park when he turned 10 years old.

Arnold turned the discipline into drive.

He knew he was destined for big things and thought about going to America, which he viewed as the most powerful country.

At school, he saw a picture of the bodybuilding champion that was Mr. Austria also wearing glasses which he associated with intellect.

He was fascinated by somebody who could be clever and strong.

Arnold began to train with friends in the park, going there daily.

One day he met Mr. Austria and occasionally began to train with him.

It was here he saw that there was no shortcut to success, you had to earn it.

He was told that if he trained hard he too could win Mr. Austria, so he decided that’s what he would do and envisioned that this
would be how he would get to America.

When he first performed weightlifting in public, the applause from the crowd had a big effect on him and he realized that he performed much
better in front of others.

At 18 he went to join the Austrian army as all young men had to serve.

Basic training taught him that something that may seem impossible at the start can be achieved.

He continued training in the army and was able to eat meat every day for the first time in his life.

He took the position of a tank driver which required three years of service but he asked to leave early as he was offered a job managing a gym in Munich, Germany.

His accident-prone tank driving record may have helped his request being approved.

Working in the gym and recruiting new members meant that he had to split his own workouts and train twice a day.

He realized that this was a great benefit when he noticed the results.

Schwarzenegger signed up for Mr. Universe in London, the biggest bodybuilding event in Europe.

In 1966 at 19 years of age, he took his first flight and came second, which was a lot better than he imagined.

This caused him to start being mentioned in magazines and his mindset for every competition from then on was to win rather than just compete.

In his quest to “leave no stone unturned” and not enter a competition at a disadvantage, he used steroids, which were legal at the time.

He won Mr. Universe the following year and his lifestyle changed significantly.

Schwarzenegger knew that to get to America he’d have to dominate bodybuilding in Europe and set about doing just that, retaining his Mr. Universe title.

He was then invited to defend his title in Miami but came second.

As a rising star, Schwarzenegger was invited to stay in America for a year to train with other established stars.

Moving to such a different country was a challenge but he quickly felt at home when training at Gold’s gym in Los Angeles and made many
friends there.

He signed up for English classes to speed up picking up the language.

His main mission though was to train like hell and win more titles the following year.

He did this by focusing on his flaws to remove any weak points and not just work on what he was good at.

For some extra money, Schwarzenegger took a driving job and then worked at a weightlifting and supplements store.

He got advice and learnt on how to succeed in business from the owner of the store, who became his mentor.

One piece of advice was the importance of going global rather than limiting business to one country.

Schwarzenegger won more titles and then began on phase two of his American dream – getting into the movie business.

He was recommended when a bodybuilder was required for the film, “Hercules in New York” but his Austrian accent was so thick, his lines were dubbed.

As his English improved, Schwarzenegger gave seminars and also started a mail-order business selling training booklets and other weightlifting
products.

This business gradually built over time.

He also worked in construction and went to college to learn business.

In 1970 over a two-week period, Schwarzenegger won Mr. Universe, Mr. World, and Mr. Olympia to become top of the bodybuilding tree.

The money he received from these titles coupled with profits from his other businesses allowed him to put some of it into an investment.

He researched real-estate for a couple of years and worked with an existing real-estate expert, investing in apartment blocks to rent
out.

He published a book on the sport and then built on the book’s success by taking part in a documentary where Schwarzenegger came
out of temporary retirement to win the 1975 Mr. Olympia for a record 6th time in a row.

He also created his own bodybuilding show and appeared on national talk shows to educate the public, giving the sport a face at the
same time.

His appearances on the tv opened up opportunities to meet people from the acting world and he was soon appearing in roles on television
shows.

After taking acting classes for three months and working on his accent, he transitioned into films.

Schwarzenegger’s financial situation meant he could reject roles where he wasn’t the leading man.

He won a Golden Globe for the film, “Stay Hungry”.

As he became more known, his size, accent, and the unusual name became beneficial.

In 1977, he met his future wife, who is the niece of former President John F. Kennedy.

After marrying, they had four children but the marriage ended many years later after it emerged that Schwarzenegger had fathered
a child with their housekeeper.

His time with Maria’s family allowed him to experience what it was like to be part of a presidential race and other political events.

By 1981, his real-estate portfolio had helped Schwarzenegger make his first million.

He was awarded a degree in business.

He returned to bodybuilding to take his 7th and last Mr. Olympia crown and he was cast to play Conan in the box office smash, “Conan
the Barbarian” in 1982.

Despite being interested in politics, he stayed away from it in public while focusing on his movie career as any political view could turn
off some of the potential audience for his films.

In 1983, Schwarzenegger acquired dual citizenship and became an American citizen which allowed him to vote and run for office.

His next goal was to earn $1 million for a film role, which he achieved in 1984.

He promoted his films across the world to cultivate and expand his audience with each movie.

He differentiated himself from other action leading actors with humor and funny one-liners.

His dream of doing comedy came true when he felt it was the right time to transition into comedy films.

As an unknown comedic actor, he negotiated his role in “Twins” so as not to take a salary (in case it flopped) but received nearly 20% of any income it made.

It was a hit and he’s earnt over $35 million from the movie.

Schwarzenegger was exposed to more political encounters when he supported vice-president George Bush on his presidential campaign,
traveling with him across the country on Air Force Two.

Later, when George Bush did become President, he appointed Schwarzenegger as his fitness czar where he coordinated a national fitness
campaign.

Former President Richard Nixon suggested to Schwarzenegger that he should run for governor and the idea of entering politics stayed in
the back of his mind.

In the meantime, one of his long-term goals was to get rich and stay rich, so he looked into diversifying from real-estate into other endeavours.

He tapped into the growth of the stock market by investing in big risks for big returns.

He also bought a Boeing 747 and entered the aircraft leasing trade. It cost $147 million.

He also invested in the restaurant chain Planet Hollywood.

Life slowed down temporarily when he had open-heart surgery for a hereditary heart defect in 1997.

He was operated on twice after the initial operation was unsuccessful.

People were hesitant to offer him film roles afterward but after a year or so, the phone began to ring again.

One of Schwarzenegger’s goals for 2001 was to explore running for governor the following year.

After researching how he would be viewed he had advantages such as being known by the public with 60% viewing him in a positive
light, but disadvantages such as no track record and knowledge of certain issues not being deep enough.

He slowly started raising funds and building alliances but eventually decided against it.

Then in 2003 a special election was announced for the state of California.

Schwarzenegger was tired of acting and needed a new challenge, so he decided to stand as a candidate in his adopted state.

He focused on improving his credibility by gaining a deeper understanding on various issues the state faced as well as learning about policy and government.

He won and took office with no previous experience as an elected official.

Schwarzenegger set about creating a ten-year Strategic Growth Plan for the state, showing he was not afraid to tackle big problems.

He took on major issues such as the environment and infrastructure investment which were difficult for the opposition to oppose.

He capped and reduced carbon emissions and successfully won a second term in a landslide victory.

His second term was more difficult and after failing in an attempt to reform health care in 2007, he then had to deal with wildfires
in San Diego.

There were nine deaths and 85 injuries but 500,000 people were successfully evacuated.

He also had to make unpopular choices after the financial crisis in 2009 and the resulting unemployment and recession.

Eventually a lot of progress was made with reform achieved in several sectors and the state becoming an international leader in
renewable energy.

After leaving office, he returned once again to movies, starring in films such as the box office hit “The Expendables 2”.

Arnold Schwarzenegger’s story of how a skinny Austrian boy went on to become the Governor of California is inspirational and shows how
a person can become a super-achiever if they are immensely disciplined.

The secret to his success is not a secret at all.

There are no shortcuts, everything is reps, reps, reps, whether it’s exercises in the gym, practicing lines and stunts in movies, or memorizing speeches and information on the political stage.

This is how he became the greatest in multiple activities.

To dive deep into the details, get the audiobook for FREE or order the book here.

What did you learn from the book summary of Total Recall? What was your favorite takeaway? Is there an important insight that we missed? What do you disagree with? Comment below or tweet to us @storyshots.

The Magic of Thinking Big

The Autobiography of Benjamin Franklin 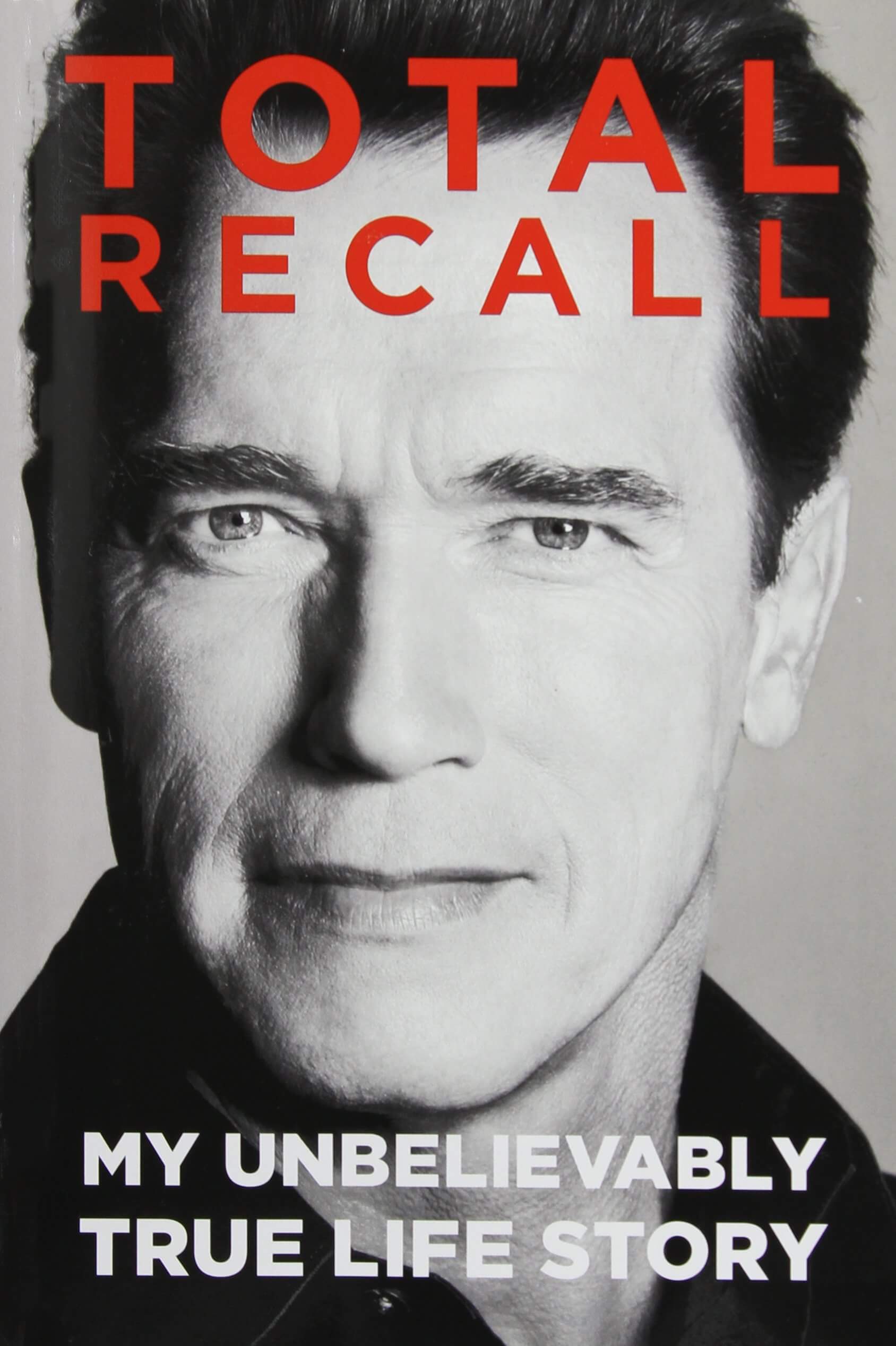