Life gets busy. Has Six Thinking Hats been gathering dust on your bookshelf? Instead, pick up the key ideas now.

We’re scratching the surface here. If you don’t already have the book, order the book or get the audiobook for free to learn the juicy details.

Edward De Bono is one of the pioneers of Brain Training. In 1967, he invented the world famous Lateral Thinking Technique. De Bono is a proponent of the direct teaching of thinking as a skill. He has dedicated his life to helping people worldwide improve their thinking abilities and creativity skills. His courses have been used by top corporations, governments and world leaders. That said, they are also highly accessible, having been used by schoolchildren. De Bono believes his techniques help people of all thinking levels to make smarter decisions in less time.

Six Thinking Hats provides six approaches that can be used interchangeably as a critical thinking tool. Imagine you were an explorer and found yourself on an island. Naturally, you would like to find out what is happening on that island. The most common approach would be to observe and take notes of every prominent feature. The issue with this approach is that it neglects many less prominent details that are still important. The Six Thinking Hats approach helps you look at every critical detail one bit at a time. These six thinking hats have different colors and each color functions differently.

Six Thinking Hats’ premise is that doing everything simultaneously would only create confusion. Basically, Six Thinking Hats gives you a frame of reference. This reference provides three clear uses.

So, now you should have an understanding of the benefits of the six thinking hats.

Explanation of The Six Thinking Hats

The six thinking hats each have unique features that complement each other but are clearly distinct. The picture below displays this point and the following outlines will also make this clear.

The Blue Thinking Hat Is About the Process

“Real life, however, is very different from school sums. There is usually more than one answer. Some answers are much better than others: they cost less, are more reliable or are more easy to implement. There is no reason at all for supposing that the first answer has to be the best one.”

This thinking hat is focused on information. So, they collect this data and information to guide the team’s decision-making and efficiency. The white hat is neutral and objective. That means they should not be passing judgment while wearing this hat. Instead, white hats are merely collecting.

The author offers an example to help you remember the information-oriented nature of white hats. He explains that paper is generally white and we use paper to write information. So, white hats write facts on white papers.

The red thinking hat pays attention to their feelings and responds accordingly. While wearing this hat, you should be relying on your gut reactions. You do not need to justify your intuitions or gut reactions. Instead, just provide statements based on how you feel.

The author explains that this hat is crucial to team unity. Often people are happy to go along with something they disagree with as long as they are allowed to express their feelings. So, the red hat allows team members to vent and feel like they are free.

This hat is all about expressing how you feel in every moment. It is fine to have a change in your emotional state. For example, you might dislike the sound of an idea at first but then change your mind. Instead of worrying about seeming inconsistent, De Bono suggests you state every change in your emotions.

“We may have a perfectly adequate way of doing something, but that does not mean there cannot be a better way. So we set out to find an alternative way. This is the basis of any improvement that is not fault correction or problem solving.”

The black thinking hat is perhaps the most common hat in organizations that do not use the six thinking hats. People are used to finding faults with concepts. They’re also used to talking about obstacles. Finding faults can be positive, but it can have a negative impact when it is being overused. This is why De Bono believes it is better to have a single hat dedicated to finding faults.

The benefit of black hat thinking is it helps you spot the risks associated with decisions. People talk about bad things all the time, which can make meetings counterproductive. So, black hat thinking should not be purely about negative points. Instead, it should also be about minimizing risk through policy and regulations.

The Yellow Thinking Hat Is About Benefits

Yellow hat thinking considers all the positive aspects of an idea or concept. So, while wearing this hat, you should be talking about all the good features. But, as with the black hat thinking, yellow hat thinking must also be applied with logic. When identifying the benefits, you must be logical and provide justification.

The purpose of yellow hat thinking is to seek harmony through finding positives. So, while wearing a yellow hat, you should constantly be considering how an idea is useful, which requires you to value sensitivity. Instead of considering law and policy, you should be talking about what values go with a particular topic. Plus, what type of ethics judgment that the team needs to be aware of.

The final thinking hat is the green thinking hat. This hat aims to create the solution to the problems that you find in black hat thinking. The green hat is also responsible for answering the statement of provocation and investigation. So, they investigate and seek solutions, ideas and alternative possibilities.

The Movie Example and Exercise

The easiest way to understand a concept is to use an example. So, suppose a team of six thinking hats is considering the topic of movies. With this example, the tasks and approach of each hat would be:

The six thinking hats offer balance in a world where teams tend to focus on the negatives. They also help prevent us from focusing on our ego and encourage us to consider the team’s performance. Six Thinking Hats supports the separation of different modes of thinking. When you talk about one thing at a time, you can give it your full attention. This is why it makes sense to put on one hat at a time. So, Six Thinking Hats promotes single-tasking and focused work. When you mix everything up, you slow yourself down.

Single-tasking within a team that includes all thinking hats will allow you to think together in a focused manner. Crucially, you don’t have to use six thinking hats at all times. For example, suppose you have a meeting or a collaborative effort. In that case, you can simply decide in the middle of a meeting, “Hey, we need to just think of the advantages for a few minutes.” So, everyone will put on a yellow hat at the same time. It’s a deliberate focusing tool you can use at different times or can be used simultaneously within a well-balanced team.

New to StoryShots? Get the PDF, audio, and animated versions of this summary of Six Thinking Hats and hundreds of other bestselling nonfiction books in our free top-ranking app. It’s been featured by Apple, Google, The Guardian and the UN as one of the world’s best reading and learning apps.

Comment below and let others know what you have learned or if you have any other thoughts.

To dive into the details, order the book.

Where Good Ideas Come From by Steven Johnson

The Checklist Manifesto by Atul Gawande

The Laws of Human Nature by Robert Greene 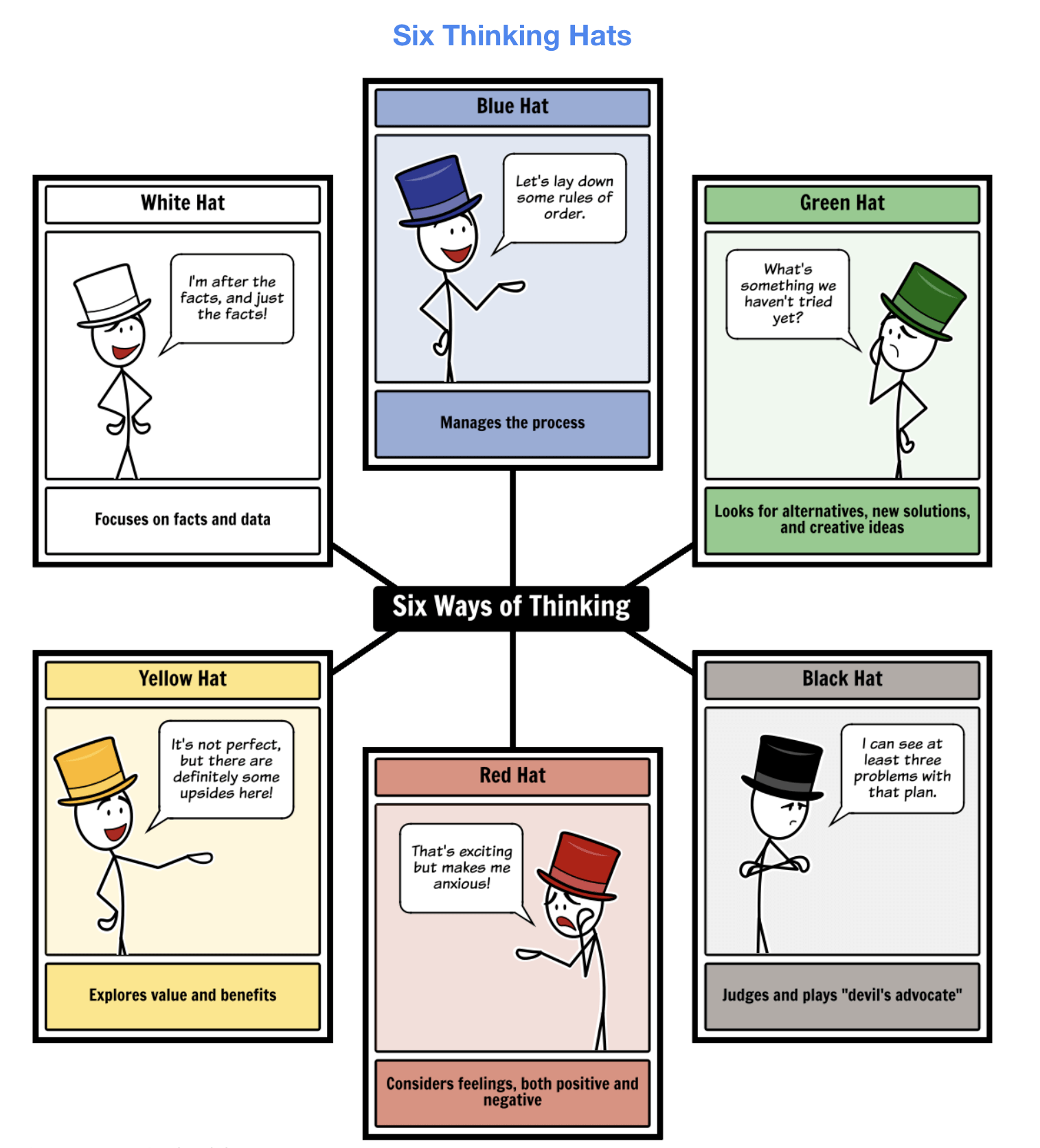