Summary of The 8th Habit by Stephen R. Covey

The 8th Habit: From Effectiveness to Greatness is a follow-up to The Seven Habits of Highly Effective People. It clarifies and reinforces Covey’s earlier declaration that “Interdependence is a higher value than independence.”

Let’s expand on this by examining the leadership of Steve Jobs as an example.

Steve Wozniak: “You can’t write code, you’re not an engineer, you’re not a designer, you can’t put a hammer to a nail. I built the circuit board, the graphical interface was stolen from Xerox Parc, Jef Raskin was the leader of the Mac team before you threw him off his own project. Everything — someone else designed the box! So how come 10 times in a day, I read “Steve jobs is a genius.” What do you do?”

Steve Jobs: “Musicians play their instruments. I play the orchestra”.

This might sound strange but have you ever considered yourself to be the person who either plays the instrument or the orchestra?

One of the things I find fascinating is people who know how to motivate others to do great things and the way they gather a group of people from different backgrounds and have them march towards a common goal that may seem impossible. And yet, there are people who actually did accomplish those types of challenges and actually changed the world because of it. For instance, you’re aware of how in around 400 BC, Plato managed to win the hearts of many because of the way he challenged the common man’s way of thinking. He influenced many others to follow his way of thinking up to this very day. But this can also be used in a negative way. Because you have people such as Adolf Hitler who managed to influence a huge part of the world but not in a way this technique should have been used.

But I think it’s better if we start with Steve Jobs to cover the main theme of this book because if you look at Jobs’ life, despite some of his negative qualities, he actually knew how to motivate other people to create the products he always envisioned, even when people constantly declared what he said was impossible to create he would speak to them in a way that made them push past their own limit and get it done.

Back when Alexander the Great took the throne he had used his ability to influence others to unite the people of Greece before it tore itself apart in a civil war.

So you can see just how powerful the power of influencing other people can be. Once you understand the way it works. The skill to be an inspiration upon others is known as the 8th habit that Stephen Covey goes over in his book. It’s when you have the mindset to constantly look for the potential in yourself and other people to build your own foundation or dream.

The great achiever finds and uses their own voice

For example, Steve Jobs constantly found ways to make a profit based on products his friends made whether it was a blue box that allowed people to make long-distance phone calls for free or Pixar. He always found a way to use his ability to sell something he became a part of.

Before you could gain an understanding of what you naturally like doing or what you’re talented at, you need to know what’s naturally attractive to you. And one of the best ways to find what you’re talented at or what you enjoy doing is to find someone else you admire. It should be someone you can imagine yourself being in some way or another, and that person doesn’t even have to live the lifestyle you want or desire. But they should carry the mentality that you admire.

Let me give you an example. Steve Jobs was inspired by his father who introduced him to the world of engineering and design. And, he installed in him the many principles of good design that actually helped him create Apple products in the future. Steve Jobs may have not cared about becoming a car mechanic like his father, but he took the concept of designing different objects and putting them together to create something new and great.

He would then combine that passion with his love of electronics that would eventually lead him to build Apple products. And this is how you can become inspired by ideas that people live by too. After all, Rhonda Rousey was inspired by a quote that Bruce Lee said, which was, “I’m not in the world to live up to your expectations and you’re not in the world to live up to mine.” And as you can see, it doesn’t take much to truly motivate someone to change the world. But it’s still not enough to find an idea that you relate the most. You still need to increase your knowledge of it if you want to become great at it. Even if Steve Jobs discovered his passion for electronics and technology, he continued reading about any subject related to both of them. And after dropping out of college, he continued expanding his knowledge upon any subject relating to technology or business.

So you can see just how part of your journey is just examining your natural talents, what you love to do and what naturally interests you the most. You may not like the idea of being a doctor, but that might be a doctor out there who you do admire because of his/her ability to find the sources behind people’s diseases. You can then take the concept of always searching for the main problems behind big issues that happen in the world and then finding ways to cure them. And the more you listen to what you naturally love doing, you’re going to see that it’s going to be easier to stay on that path. And part of that path is never allowing your past or your current circumstances to determine your future. You see after Steve Jobs left his own company, he didn’t let that stop him from having fun with his talent to sell his dreams.

Instead, he formed another company using his natural talents and made that company into a success. It is fair to say you always have a choice. You can either give up when things go bad or you can learn to see the new opportunities that are presented to you. For Steve Jobs, after he was booted from Apple, he saw that as a new opportunity to start other ideas he had in his head but couldn’t execute on back when he was at Apple.

Your ability to inspire others to find their voice

Finding your own voice isn’t where it ends for you. It is not even close. In fact, it is just the beginning for you. Don’t worry, let me explain. Although Jobs didn’t have the best relationship with his coworkers, he needed them more than anybody else in the company to realize the ideas he drafted up for them and to give the employees and those who work with to look past his rude behavior.

He would convince them that anything was possible. They looked at it differently. He would say things such as if you could save a person’s life, can you make this computer boot up 10 seconds faster? And by giving his small team perspectives like those to make his products, he led them to design the original Macintosh. Jobs’ slogan was to make it insanely great, never even referring to profit. He even said, don’t worry about the price. Just specify the computer’s abilities. Steve Jobs’ ability to push people to do the impossible is still admired today because he made his colleagues stop focusing on ways they can sell the products to make maximum profit and rather how they can revolutionize the world and after you find your voice, this is when you want to inspire others to do the same because that’s the main role of leadership. Your ability to let others see their own potential.

Great leaders inspire people by placing a one voice idea into their heads. They create a shared vision and in a way, not only did Steve Jobs create a one voice idea for his company to follow. He placed it into our heads too. He gave us the idea of paying for an iPod or iPhone because something about it screamed inspiration and genius. There was a strange uniqueness about it and in a way, it brought us together to do things we never thought we would. I don’t care whether you want to own a company, influence other people, or get people to buy whatever you’re selling because none of that is actually going to matter because you’ll never get far if you can’t find a purpose to unite a diverse group of people together.

Organizations that have great leaders like Steve Jobs, inspire people to let them believe that they can make a difference in this world. Overall. The point this book makes is to first find your inspiration through someone you admire and then once you find your own voice, help others find their own voice too. That way you can create a united purpose and get people to follow your dreams and will, and that’s the 8th habit by Stephen Covey.

The central idea of the book is the need for steady recovery and application of the whole person paradigm, which holds that persons have four intelligences – physical, intellectual, emotional and spiritual. Denial of any of them reduces individuals to things, inviting many problems. The industrial age is assumed to have been a period dependent on such denial. Covey believed the information age and a foreseen “Age of Wisdom” require “whole” people (in whole jobs).

The key to learning the 8th Habit is the whole-person paradigm. To achieve our potential, we should respect each of the four elements of ourselves – body, mind, heart, and spirit. To improve teamwork and get the most from our people we need to honor each of these aspects and respect each team member as a whole person.

To shift our paradigm to the whole person thinking, we need to understand that human beings are four-dimensional and only by appealing to all four elements of human nature, can you truly inspire a team.

The book takes us through the roadmap to achieve true fulfillment, success, and contribution for both the individual, as well as the business. To create a new spirit of enthusiasm and commitment in our teams. Part of the process is to embrace a new culture for the leadership of an organization, where not only the senior positions lead and demonstrate the following four roles of leadership, but everyone at every level of the organization. Developing a culture of trust.

To achieve greatness, we need to understand how to execute the change process. Covey details The 4 Disciplines of Execution.

People can discover their voice because of the three gifts everyone is born with:

Covey talks about great achievers expressing their voice through the use of their intelligences. Achievers, for example,

Adapted from a video by MentalReach, Michele Rawlins’ summary and Wikipedia. 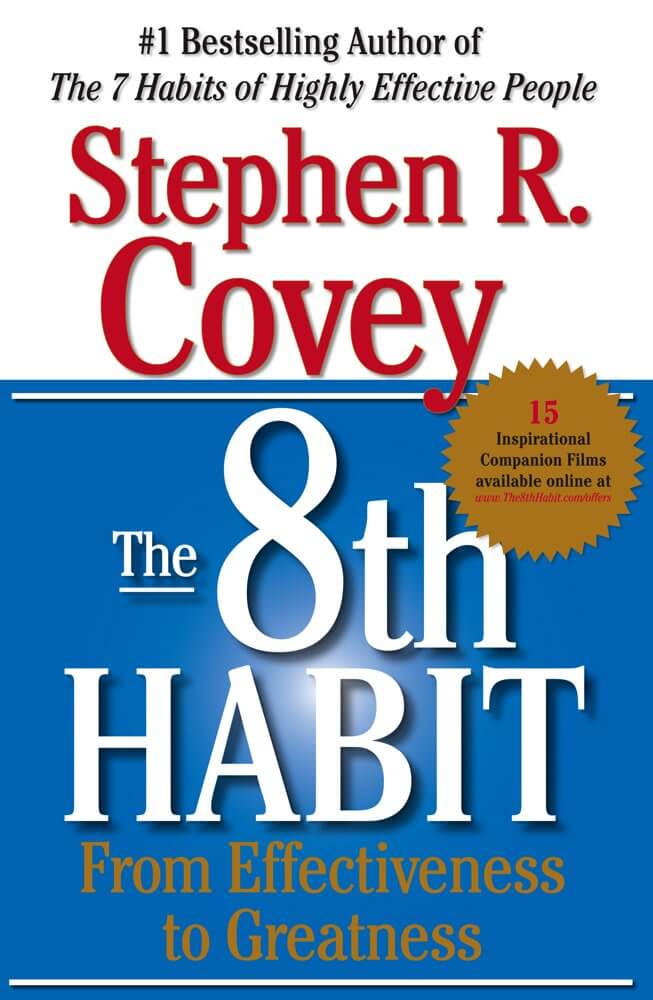